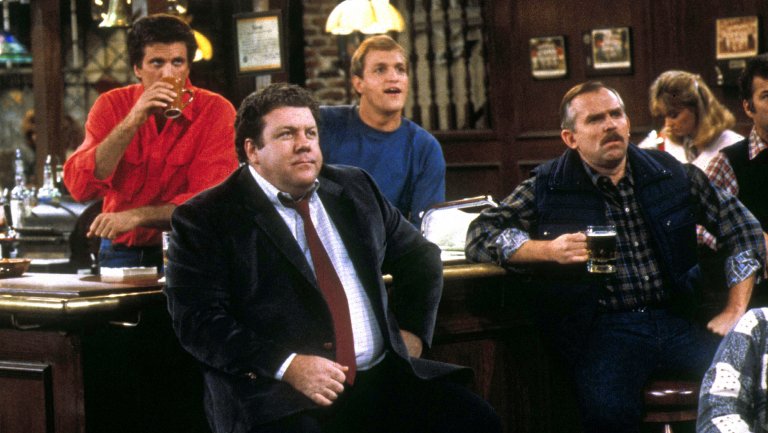 One of my favourite adventures is visiting different types of bars and pubs around, whether it’s local or in different city or country.  Besides doing that, I also love watching TV shows and movies, so that’s why this post is about some cool fictional places that I would love to hang out with my friends and have some cold brews.

Sometimes you want to go, where everybody knows your name. That’s where Cheers comes along. The show is about Sam Malone, a former relief pitcher for the Boston Red Sox who owns and runs the bar Cheers.  A cozy bar in Boston, Massachusetts.  There are several crazy characters that make this bar their home-away-from-home.  Some of those characters are beer-loving accountant Norm and letter carrier Cliff.

Fun fact, there are actually two real Cheers locations in Boston to go visit.  One is located in Beacon Hill and the other is in Faneuil Hill.  I have been to both and it was cool just to say that I was there!

MacLaren’s Pub (“How I Met Your Mother”)

MacLaren’s Pub is the home of the cast of “How I Met Your Mother”.  The story follows of Ted Mosby telling his children of how he met their mother.  With the help of his friends Robin, Barney, Marshall and Lily, Ted is on his journey to find love. During that time, they love to hangout at MacLaren’s Pub.

MacLaren’s was based on a real bar in New York City where the show takes place.  The creators of the show went to a place called McGee’s (W. 55th St.) while working for Dave Letterman’s “The Late Show” and came up with the concept of MacLaren’s.  I heard you can even order food at McGee’s inspired by HIMYM. FYI, still very disappointed with the way HIMYM ended…redo please!??

Coyote Ugly is a 2000 romantic musical comedy – drama based on the actual Coyote Ugly Saloon.  Set in New York City and the movie follows Violet Sanford (played by Piper Perabo) who moves to the city of New York to become a songwriter. While struggling to get noticed from record companies she decides to get a job at a bar called Coyote Ugly just to make ends meet.

To this day, Coyote Ugly is probably one of the most well-known bars around the world, with over 20 locations in the U.S. and other countries like Russia, Japan and United Kingdom.  According to Coyote Ugly’s website, there is to be a location coming to Canada soon (when that will be, I have no idea). I have been to the one in Las Vegas inside the New York New York Casino and Hotel and I have to admit, it was a lot of fun!

Those are just a few, but there are so many other places that I would love to ‘visit’. Check out the slide show below for more.

Did I miss one of your favourite TV/movie bars? Let me know.